Ladies Senior League
Oran 1-8 Clann na nGael 0-9
Clann were defeated by last year’s Intermediate champions on Saturday evening last in Athleague. The first half was very low scoring with the team’s level with two points each after 25 minutes. A Blana Gately free was added to by the same girl from play before Eileen Goode came to Clann’s rescue with a great dive to her right to push out a penalty. Two late first half points from Michelle Harney-Nolan and Maz Sweeney left both teams on 0-4. Oran soon went four points up on the restart with a sucker punch of a goal. Clann rallied with points from Ciara Fallon and Maz Sweeney. Oran kept their noses in front throughout the second half as Clann tried in vain to get that crucial goal. Blana Gately scored two more frees before Tracey Keegan rounded her marker to fire over a good point.
Team: Eileen Goode, Michelle Keegan, Aisling Egan,Gillian Wall, Caroline O’Neill, Niamh Fallon, Katie Ward, Martina O’Brien, Michelle Harney-Nolan 0-1, Ciara Fallon 0-1, Blana Gately 0-4 (3f), Maz Sweeney 0-2, Kathleen Doran-Rourke, Tracey Keegan 0-1, Anna Shine. 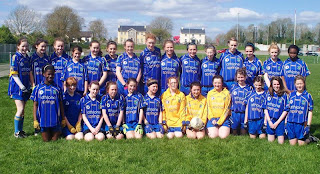 The U-14’s qualified for the National Féile Final in Derry by virtue of a good win over Boyle on Monday. An early Therese Lennon goal settled Clann and the same girl followed with a second goal later in the half. Saoirse McManus added a free to leave Clann in a strong position at the break. A further goal from Ruth McManus and an Ashley Rose Coyle point were added to by four points from midfielder Ciara Quinn in the second half. This is the second time in three years Clann have qualified and they will be determined to leave their mark in Derry on the first weekend in July. Congrats to all involved.

U-12 Ladies Championship
The U-12’s continued their unbeaten run with a good win over Boyle during the week. They have a busy schedule this week with matches against Strokestown and Padraig Pearses.

O’Rourke Cup
Clann na nGael 2-13 St. Faithleachs 0–7
The Clann na nGael Athlone Springs senior team played St Faithleachs in the O’Rourke cup on Friday in Johnstown. Clann were out of the traps faster than a greyhound and were 1-2 up early on. Clann continued the onslaught for the remainder of the half and Led 1-7 to 0-2 up at the break. The visitors put up a better performance in the second half, but Clann finished the game as they started with a 1-3 salvo to put the icing on the cake.
Team and scorers: Darren Lennon, Denis Gavin, Liam Óg Naughten, Niall McManus, Brian Goode, Cathal Duignan, Eugene Petit, Cathal Shine, Gary Shine, Matt Scally 0-2, David Flynn, David Kelly, Ross Naughton 0-2, Donal Shine 2-6, Jonathon Dunning 0-2. Subs: Ronan Gavin 0-1, Emmet Rock.

GAA Playing Rules
The GAA Congress 2010 passed a number of playing rule changes relevant to football and hurling which will come into effect in all games played on or after May 15th 2010. A summary of the rule changes is available to download from the GAA website at www.gaa.ie

This is a widget ready area. Add some and they will appear here.