Tracking progress from the start of the project in February 2010.

15 December 2013: Sincere thanks to the people of the parish for their generous support for the upkeep of the graveyard and particularly during their recent collection. The group wishes to acknowledge two very generous donations they received during this collection. These monies will help continue the good work that is being done by the committee and members of the group.

24th November 2013: Congratulations to Drum Cemetery Voluntary Group who were awarded first place for best kept graveyard by Roscommon County Council. The award is well deserved and recognises the great work that is carried out by the group along with the support of the community. Envelopes for a collection towards the upkeep of the cemetery have been distributed to all homes in the parish and anyone wishing to contribute to the collection is asked to return the envelope to the church or parish office.

15 September 2013: Thank you to all who attended the Mass in Drum Cemetery last Sunday. Special thanks to all those who helped with the preparations and participated in the ceremony, including members of Drum Cemetery Voluntary Group, choir, readers, eucharistic ministers, collectors, and all who helped in any way.

1 September 2013: Mass for the Deceased of the Parish will be held in Drum Cemetery on Sunday 8th September 2013 (weather permitting)

25 August 2013: It has come to the attention of Drum Cemetery Voluntary Group that items have been taken from the graveyard. We are asking people to be vigilant and contact any member of the group.

26 May 2013: A Corpus Christi Procession will be held in Drum next Sunday 2nd June, commencing after the 10am Mass from the church down to the reflection area in the cemetery and back up to the church for benediction (weather permitting).

17 February 2013: Drum Cemetery Voluntary Group AGM will take place on Wednesday 20th February at 9pm in Drum Parish Hall (please note change on time). The group would like to acknowledge the amount of €800 in lieu of flowers for cemetery maintenance to the memory of the late Willie Kelly, Clonbulia.

23 December 2012: Drum Cemetery Voluntary Group received €612 from the Cornafulla School Reunion Group and wish to thank them for their generous donation.

16 December 2012: Drum Cemetery Voluntary Group  would like to acknowledge all of those who have sent back their annual cemetery maintenance donation envelope. Anyone else who wishes to make a donation can do so by returning their envelope to Drum Parish Office.

28 October 2012: Envelopes will be distributed during the month of November for the maintenance of the graveyard. Your support for this Annual Collection will be greatly appreciated.

2 September 2012: Mass for the Deceased of the Parish will be held in Drum Cemetery on Sunday 9th September 2012 (weather permitting)

1 July 2012: Drum Cemetery Voluntary Group would like to acknowledge all the work the families have put into the upkeep of their graves this year. It is a credit to them and the committee appreciated the effort involved.

10 June 2012: A Corpus Christi Procession will be held in Drum next Sunday 10th June to mark the International Eucharistic Congress being held in Ireland this year. The procession will commence after the 10am Mass from the church down to the reflection area in the cemetery and back up to the church for benediction. All are welcome.

4 March 2012: Drum Cemetery Voluntary Group was awarded Second Prize in the Tidy Cemeteries Competition for 2011. Roscommon County Council would like to acknowledge the hard work and dedication of the committee members and the local community. Congratulations to everyone involved.

9 October 2011: The new Reflection Area in Drum Cemetery was officially blessed by Fr. Ray Milton, former CC Drum now PP Knockcroghery, during a special mass held in the cemetery on Saturday 8th October at 2pm. The reflection area was developed by Drum Cemetery Voluntary Group, who have been working to maintain and improve the cemetery on a voluntary basis since February 2010. The mass and blessing were followed by refreshments in Drum Parish Hall, where Canon Liam Devine, PP St. Peter & Paul’s Parish, officially launched the Drum.ie website and an online database record of the graves in Drum middle graveyard. The database has been developed by members of the group and they hope to expand the database next year to include Drum new graveyard. 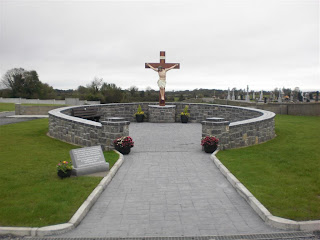 25 September 2011: Drum Cemetery Voluntary Group would like to invite everyone to the official blessing of the New Reflection Area in Drum Cemetery on Saturday 8th October. Commencing with Mass at 2pm celebrated by Fr. Ray Milton, followed by the presentation of a new online database record of the graves in the middle graveyard. Refreshments afterwards in Drum Parish Hall.

7 August 2011: Many thanks to all those who have returned their collection envelopes to date. If you have not already done so, please return your envelope to Drum Parish Office.

26 June 2011: Newsletter with update on the continuing work in the cemetery and envelopes for the annual collection will be distributed over the coming weeks in the Drum Parish and surrounding areas. Thanks for your continued support. More details on www.drum.ie/cemetery

17 April 2011: There will be no work done in the cemetery on Holy Saturday, 23rd April. Sincere thanks to all who have participated and contributed to date. Please remember to remove all rubbish from the graveyard.

3 April 2011: Work in the cemetery has recommenced. Volunteers welcome to join in the work on Saturdays at 10am for the coming weeks.

30 December 2010: A total of €918.20 was raised on St. Stephen’s Day at Clann na nGael’s annual married v singles match in Johnstown, and the money raised this year goes to Drum Cemetery Voluntary Group. Thank you to all involved.

22 December 2010: Clann na nGael will play their annual married v singles match in Johnstown at 1pm on St. Stephen’s Day, Sunday 26th December. This year the funds raised will go to Drum Cemetery Voluntary Group. All are welcome to play.

7 November 2010: Phase 2 has now been completed. The group is most grateful for all the support and would like to thank all those who helped out in any way. Work in the cemetery will recommence in spring.

31 October 2010: The Group would like to thank the South Roscommon Music Festival committee and all who supported the event for their very generous cheque towards the cemetery fund. The committee are very greatful for the support. 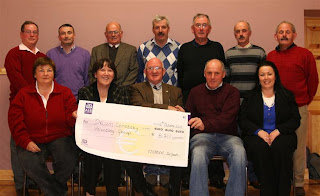 17 October 2010: Phase 2 of the work in the Cemetery has started. The Group would welcome volunteers to join them on Saturdays at 10am for the coming weeks.

9 May 2010: Phase one of the work has now been completed. Phase two to commence in September. Many thanks to all those who gave of their time and to all who responded to the voluntary contribution. The group are still seeking help to identify unmarked graves. If you can help, please contact 085-7139736.

28 March 2010: There will be no work done in the cemetery on Holy Saturday, 3rd April. Work will continue on Saturday, 10th April. Sincere thanks to all who have participated and contributed to date.

14 March 2010: Sincere thanks to all who have supported the efforts to date by volunteering to work in the cemetery. Volunteers welcome as the work continues for the coming Saturdays from 11am to 3pm. Thanks also to all who supported the voluntary contribution. Envelopes can be returned to Drum Church.

21 February 2010: You may have noticed the tremendous work that has been carried out by our newly formed Voluntary Group in our local graveyard. There has been a notable improvement already. Well done to all concerned and keep up the great work. Thanks also to our two Leader workers for their continued hard work at Drum Cemetery. Over the coming weeks, they will be asking for your help by way of a voluntary contribution to cover the costs involved and to help us continue with this worthwhile project. Envelopes will be distributed to all houses in the parish and we would ask you for your support. Envelopes also available at back of Church or contact the Drum Parish Office at 090-6437125.